By Katie NeubertJune 24, 2015No Comments

The Department of Agriculture was called to a puppy mill in Michigan to collect nine purebred Dachshunds. SICSA received two of the puppy mill dogs earlier this month. The dogs were matted and missing some hair. Pebbles and Lovely needed a little extra veterinary care beyond the normal vaccines and spay surgery. Both had a dental procedure due to poor care and nutrition, but they adjusted well and learned to trust people. 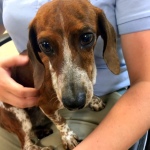 When SICSA volunteer, Carol, saw the two little girls, she melted. Carol had an adorable Dachshund at home named Hanna. She came to SICSA with Hanna in tow to meet Pebbles and Lovely. Hanna and Lovely looked so much alike it was hard to tell the difference between them. They are both long-haired red Dachshunds. Carol was very interested in adopting Lovely. Pebbles, who has a shorter coat and is speckled, immediately fell in love with Carol.

You’ve probably guessed the rest of the story. Yes, Carol decided she couldn’t leave Pebbles behind. She adopted both Dachshunds! Carol and Hanna have opened their hearts and their home to two little girls that have never known love before. Thank you, Carol, for giving Lovely and Pebbles a happy ending!

Friends of SICSA Trip to “The Wilds”

Comments are closed, but trackbacks and pingbacks are open.

Here are the answers to all your questions about canine influenza, and how to keep...

Check out a few simple ways to help the animals at SICSA. Best of all, these won't...

Puppies, kittens and the latest and greatest from SICSA to your inbox.

You have Successfully Subscribed!